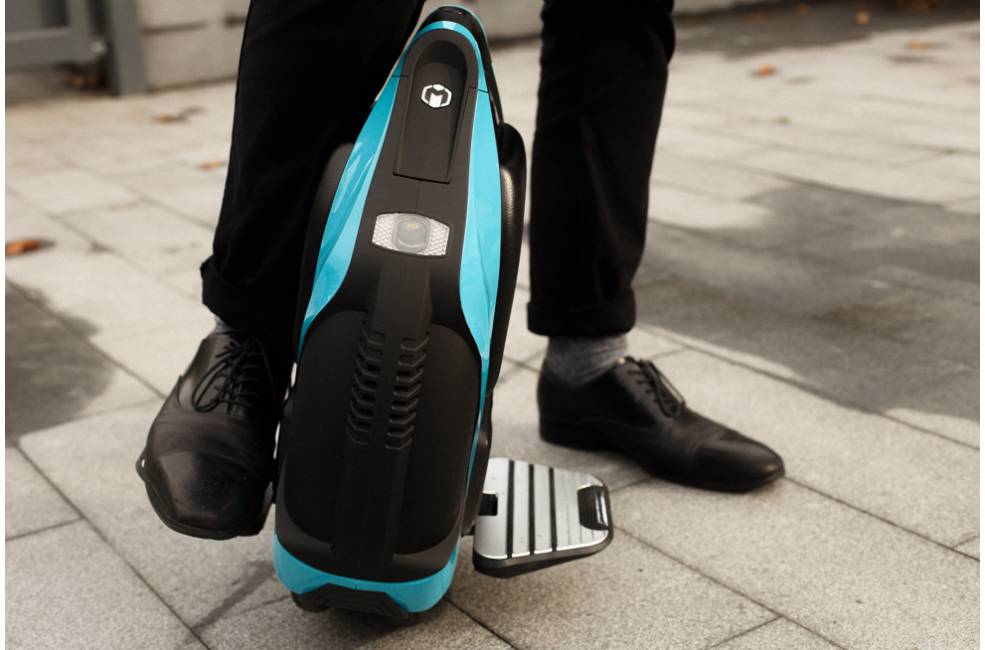 The usual term used for the electric unicycles has usually been an “EUC” (for Electric UniCycle) More informally refer to them as “wheels”.

Idling is the term for staying pretty much in place by moving the EUC back and forth. This is taxing for the motor (constantly changing direction) and eats up your battery fast, but can be useful for example to wait for a traffic light to change or such.

Leaning refers to using your body to move your center of gravity and control the EUC. You lean forwards and backwards to accelerate/decelerate or change direction. To turn the EUC, you usually lean to the direction you want to turn to (left or right), although you can also use your hips to “swivel” around for tight in-place turns.

Out-lean is a term used to refer to a situation where the rider leans (usually) forwards so much that the wheel cannot keep him/her balanced anymore, and usually ends up with the rider dismounting (or falling). Out-leaning usually occurs in uphills, where the wheel motor cannot keep producing enough torque to keep the wheel upright as the rider keeps leaning forward. Usually it occurs only after the full tilt-back, so most people shouldn’t be able to do it accidentally, unless it’s due to low battery (if the tilt-back is based on speed).

Overpowering a wheel refers to similar situation as with out-lean, but seems to be more commonly used to describe a situation where the wheel cannot keep you balanced on level ground, for example when hitting a pothole that causes the wheel to tilt too much to forward or simply out-leaning.

“Overspeed” is the speed where the mainboard cuts the power to the motor. I’m not certain why the cut-off occurs, but suspect that it would either require too much current to accelerate the motor faster (risking of burning components or voltage dropping too much) or the motor is very near it’s maximum rpm (where the torque drops so much that it cannot keep balancing the rider anymore). Some people suggest that the motor should never cut-off and instead let the pedals tilt forward once the motor cannot run any faster, leaving the rider at least a chance to try to recover, as shutting down the motor surely leads to a fall.

This is a type of braking where you push the wheel in front of you with your legs while simultaneously leaning back and pushing the pedals down to brake as fast as possible. Requires some practice, but not that difficult, and a useful skill when you need to stop “on a dime”.

Tilt-back is a safety measure, where the wheel starts to tilt the pedals backwards at higher speeds to warn and prevent the rider from leaning more forwards. While it is possible to lean more and try to get more speed, it might not be wise, as you can trigger a mainboard induced cut-off due to overspeed. Most wheels have this (some let the user adjust the tilt-back speeds with app), but some don’t have it at all.